The mountains covered in snow, the lush forests, and the rough terrains of India are always the most memorable of thrilling Himalayan adventures. While it may be expensive to experience the excitement these top Himalayan treks provide, This comprehensive list proves that this isn’t the case. If it’s the snow-bound mountains found in Himachal or the rugged terrain of Uttarakhand, Here are the best 5 treks you can cross off your bucket list. 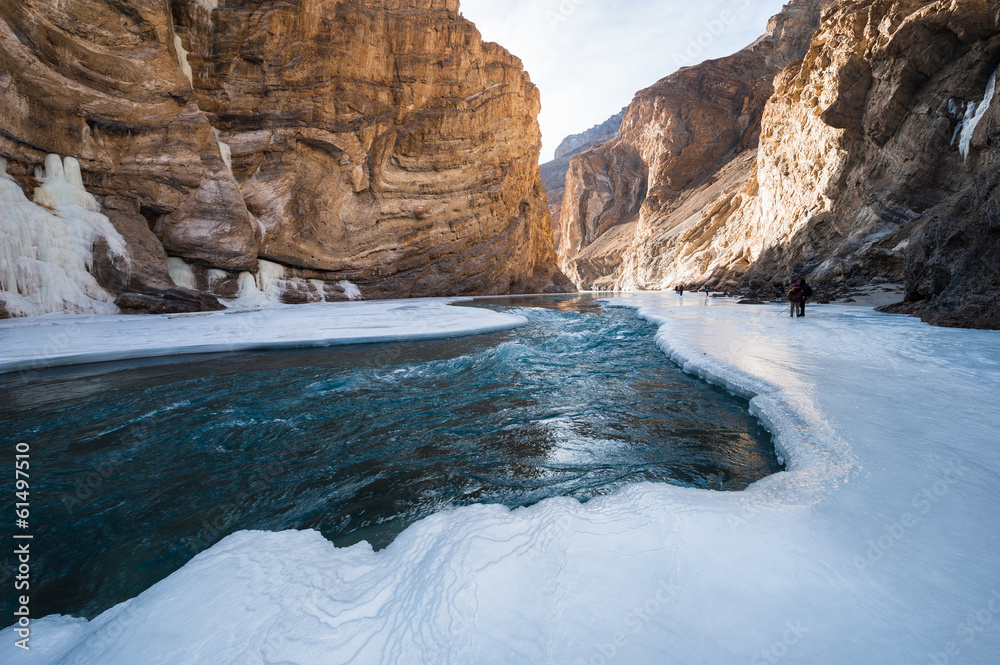 These are the same characteristics that make this spectacular trek unrivaled in the vast Himalayas. The word “chadar,” which means “a blanket,” accurately describes this trip, which involves walking on a sizable sheet of ice that has formed over the mesmerizing blue of the Zanskar River. The ice is as white as milk in some places and translucent in others, giving you the impression that you are walking on water. It’s as incredible as it sounds, but it is impossible to make it simple. The Frozen Chadar river trek  will take ten days, which seem to be too few, to be able to move on the ice and to adjust to the extreme temperature that drops to the lowest of -30°C and can cause you to feel as if your fingers are going to be ripped off. However, for these reasons, it’s an adventure worth taking! Sledges are a way to transport rations, and caves are the only place to escape the changing weather. This is once a lifetime trek to do and enjoy with your friends and family.

Kheerganga Trek is among the most popular destinations in Himachal Pradesh at an altitude of around 2950m. Kheerganga is a place that offers many unforgettable treks at the foot of the Valley. The story of Kheerganga goes back many hundreds of years ago when it was the place of residence of Lord Shiva. The Kheerganga temperature fluctuates in all seasons. It can be extremely cold in winter, with the landscape covered with sparkling snow. In spring, i.e. late in May or June, temperatures could climb to as high as 45 degrees. But winter temperatures can hit hard, and there is frequent snowfall. The hiker may choose the walk at any time of the year, based on his preferences, and for any month, whether in December or May; this is a tempting option anytime throughout the year. It’s a quick, easy walk that is suitable for beginner hikers. The distance of the Kheerganga trek is 26 kilometers.This one of the best treks to do for the trekking enthusiast.

25+ Most Important Travel Items You Need For Your Next Trip

Beas Kund is the place in which the powerful stream Beas originates. Beas flows through the beautiful meadows that are bordered by mountains. At Beas Kund, you can observe the Shitidhar, also known as the friendship peak, along with the Hanuman Tibba. You will be able to identify the Dhauladhar and the Pir Panjal Mountain Ranges with the aid of Beas. On one side, you can see Pir Panjal Mountain Ranges. Pir Panjal Mountains, and on the opposite side are the ranges known as the Dhauladhar Mountains. It is said that the Beas Kund Trek is filled with flora and fauna. Beas Kund is also a popular spot for shepherds since they can be seen camping around with herds and herds of dogs and sheep. It is an experience to feel the pureness of the natural environment, which is present in its purest beauty. The water here is the purest as it melts off the glaciers.

The Kashmir Great Lakes trek often referred to as “The Most Beautiful Trek in India”, comprises seven stunning high-altitude treks. It’s a stunning spot to experience natural beauty and excitement. As you walk along the Maple trees, You’ll see breathtaking views of the villages that are nearby downhill, including Sonamarg village. Sonamarg village. The spectacular lakes include Gadsarm, Krishnasar, Gangabal and Vishansar. The lakes have a mythological background in that they are named for gods and come with fascinating stories to go with these lakes.

There is a Goechala Trek, another gem of the east, a true classic steeped in the spirit and culture of Sikkim with a view of the huge structures of Kanchenjunga. If you’re searching for motivation, it’s best to go to Goechala for its stunning dawns, sunsets, and sunrises. Gorgeous orchards and a vast collection of fauna and flora also characterize the area. Be sure to note the prayer flags flutter in the wind. They make a great cultural difference to the entire journey.