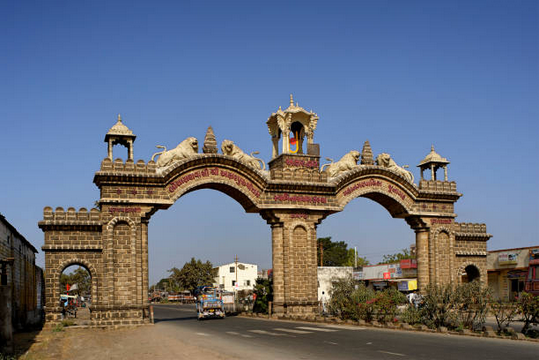 The name Junagadh means “Old Fort”. And this city is also known as “Sorath”, which is the name of the princely state of Junagadh.

Because the city of Junagadh is located in Gujarat, the language of this city is also Gujarati. Apart from this, Hindi and English are also spoken here.

Places to Visit in Junagadh

Girnar is an ancient and sacred hill of Junagadh, situated at an altitude of 3672 feet. There are 866 Hindu and Jain temples spread over the Girnar hills. To reach the final peak one has to climb 9,999 steps which start from Girnar Taleti (Foothills). A morning walk to Girnar Hill makes for a blissful experience that a tourist remembers for a lifetime. People of Hindu and Jainism often visit these temples.

Hindu pilgrimage sites: Gorakshanath Temple, Dattatreya Temple and Amba Mata Temple, and some other temples which are worth visiting. And Dattatreya Paduka, an ancient temple, is the most revered site for the Hindu.

Jain Pilgrimage Site: Girnar Hill has been an important site for the Jains since the third century. Tirthankara Neminath Temple, Lord Rishbhadeva, Mallinath, Lord Parshvanath Temple, some Jain temples which can be seen on the Girnar hill.

Ashoka’s inscription is located on the right side of the road while going from Junagadh to Girnar. This inscription is famous as Ashoka, who belonged to the Maurya dynasty. Here are 14 commandments of Ashoka written in the Pali language, it has been kept in a 75-foot enclosure for about 2200 years. This inscription, preserved for 200 years, is now preserved by the Department of Archeology, Government of India. This place is worth visiting for pilgrims visiting Girnar.

Bhavnath Mahadev Temple is one of the holiest places in Junagadh. Bhavnath has been located under the Girnar hills since ancient times. Bhavnath is a beautiful and excellent place. This place is more beautiful during the rainy season. It is also popular for Mini-Kumbh which is held on Mahashivaratri. Bhavnath is also known for the famous Bhavnath fair which takes place during January or February.

According to Hindu belief, Damodar Kund is one of the sacred lakes, situated at the foothills of the Girnar mountain of Junagadh. Damodar Kund Lake is 257 feet long, 50 feet wide, and 5 feet deep. It is surrounded by a good mold, which comes on the way to Bhavnath.

Datar Hills is a sacred site of Junagadh city. Datar Hill is a popular tourist destination and is a very popular place for devotees of both the Muslim and Hindu religions. This place becomes even more attractive during the rains. Tourists can also visit Chithariya Pir, Hathi Patthar (Elephant Stone), Koyla Wazir, Jamiyal Shah Datar Dargah, and Digambar Jain Lord Neminath Temple while visiting the Datar summit.

Must Read: Datar Hills, Junagadh – Things to know before visit

The Willingdon Dam is built on the Kalwa River from where this river originates. It was built for the collection of drinking water for the people of Junagadh. It was named after Lord Willingdon, the Governor of India. The staircase to Datar Hill starts from Willingdon Dame and leads to Jamiyal Shah Datar, a place of faith for devotees of both Hindu and Muslim religions.

Upparkot Fort makes it one of the historical places to visit in Junagadh. This fort is one of the ancient forts. There are tourist attractions like Adi Kadi Vav (Well), Navaghan Kuvo (Well), Neelam and Manek Cannons, Jama Masjid, Nuri Shah’s Tomb, Buddhist Caves. This fort is about 2,300 years old. The walls of the Uparkot fort are up to twenty meters high. If you are in Junagadh then must visit this fort.

Location: Mullawada
Time: 8:00 am to 6:00 pm
Entrance fee: Only 2 Indian Rupees per person

Junagadh Science Museum is the first science museum that started in the state of Gujarat.
Science Museum is an ideal place to have a wonderful time with your loved ones in this city. Best of all the sense of entertainment and adventure that you get to see in the Science Museum. It is not only a scenic spot, but it also helps you learn and understand a lot and there are a lot of interesting things to see here. So don’t forget to enjoy the charm of this popular tourist destination.

The Shakkar Baug Zoological Garden is one of the most popular places in Junagadh. Sakkarbagh is a place to visit with children. The main attraction of Sakkarbaugh is the Asiatic lion. Apart from this, there are also leopard, antelope, deer, blackbuck, wild boar, blue bull, birds, aquarium. There is also a natural history museum and a veterinary hospital in the Shakarbagh Zoological Garden. Sakkar Baugh is spread over an area of ​​200 hectares of land.

Mahobat Makbara(Tomb), Here is the tomb of Badruddin Hussain, who was once the Nawab of Junagadh. This mausoleum was built between 1851 and 1882. The structure of the Mohabbat Tomb is a mixture of European, Neo-Gothic and Indo-Islamic styles. The domes and minarets of the Mahobat mausoleum are built in the Islamic style and its pillars are built in the Gothic style. This is a very attractive place for history lovers.

Jama Masjid is also one of the historical icons of Junagadh which was built in 1423. Jama Masjid has an open courtyard, which is decorated with white marble. The hall of the mosque has 260 pillars and 15 domes. Like other mosques in Jama Masjid, prayers are held 5 times a day. And this Mosque is for Sunni Muslims.

Moti Baug is also one of the major places to see in Junagadh for the nature lover. Motibagh has a pond and many shrubs and plants. If you love the lush green garden, then Moti Bagh is an incredible place that should be on your list.

The Swaminarayan temple was established in 1828 and since then it is a famous Hindu temple in Junagadh. Swami Narayan Temple has many statues and 5 minarets.

If you are looking for an amusement park in Junagadh then definitely go to Suraj Fun World. People visit this place mostly at festivals.

Some other attractions in Junagadh city

Narsingh Mehta Lake is located in the center of the city which is named after 15th-century poet and saint Narasimha Mehta of Gujarat.
At Talav Gate

There are mainly 3 cinemas in Junagadh

The best season to visit Junagadh is winter. October, November, December, and January are the best time to visit here.

How to reach Junagadh

Transport in Junagadh is like any other Indian city. You can go to various places by rickshaw or hire a taxi for this.

Wilson Hills – it is one of the Best Hill Stations in Gujarat.